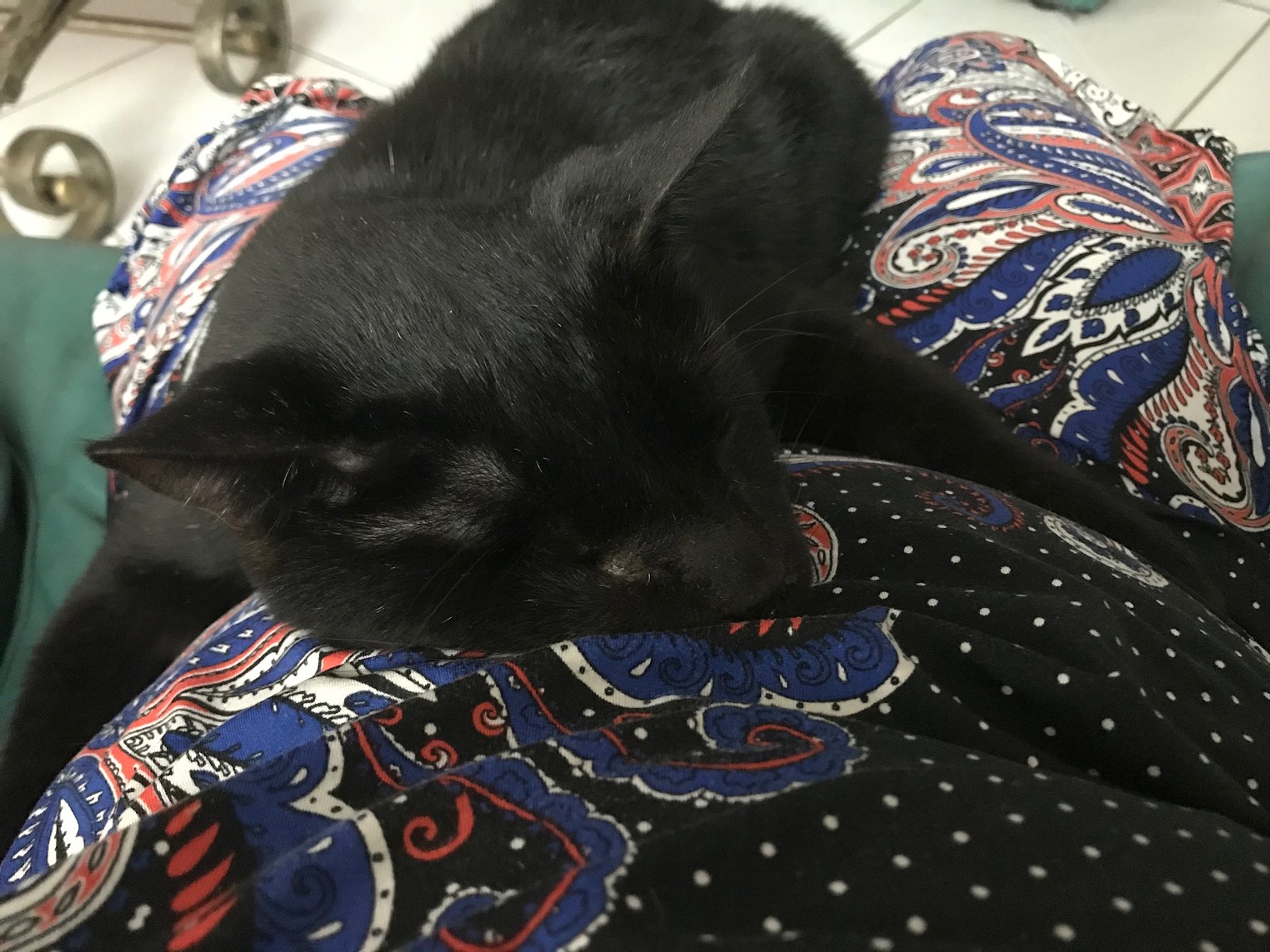 Editor’s note: One of the photos embedded in the story below shows Flash postmortem, with visible wounds on his face.

After a 2017 auto accident left a stray kitten with a broken jaw and a missing eye, Carolyn Rubido adopted the feline and named him Flash. She spent thousands of dollars on vet bills and nursed him back to health, feeding him with a bottle until he was strong enough to eat. But after three years as a happy and healthy indoor cat, Flash died suddenly last November — not from any lingering effects of the accident, but from a bath.

In a lawsuit filed in January, Rubido alleges that Miami’s Pet Grooming, Inc., a mobile grooming company, injured Flash so seriously that he bled from his mouth and paws until he died in front of her on the floor of the grooming van on November 1, 2020.

Rubido says she hired Miami’s Pet Grooming to wash Flash and her dog, Mia, and to treat both animals for fleas. A groomer from the company drove to her home in Kendall and took care of Mia without incident in a mobile grooming van. But when it was Flash’s turn, Rubido says, she grew worried about how long the bath was taking.

Support the independent voice of Miami and
help keep the future of New Times free.

“I realized that the guy was taking a long time to groom him, so I got concerned and went to the truck. I knocked on the door, and he said, ‘Just a sec.’ When he opened the door, all I heard was Flash screaming at the top of his lungs,” Rubido tells New Times.

Rubido recalls seeing Flash inside a cage that had been placed in a tub, with a fan aimed at him blowing full-blast. She saw what looked to be burn marks on his face. He was drooling profusely and bleeding from his mouth and eye socket. And he was missing claws on each paw.


She says the groomer, identified as “George” in the lawsuit but not named as a defendant, placed Flash on the floor of the van in front of Rubido, where he stumbled, began to convulse, and then died.

Rubido says the groomer told her he wouldn’t charge her for the session and that would pay to replace the cat if she wanted.

“It was really insensitive,” Rubido says. “And then they didn’t even call me after it happened. I never heard from them again.”


Rubido says she was so traumatized by Flash’s death that she could no longer walk around her house without thinking of him. Now, she’s suing the grooming company in Miami-Dade small claims court. Her lawsuit accuses the business of professional negligence, breach of contract, and intentional infliction of emotional distress.


“The botched attempt by [the Miami’s Pet Grooming] groomer was so reckless, severe and intentional that Flash died a horrific, painful death,” the complaint states.

A trial date has been set for September 10.

Miami’s Pet Grooming owner Lester Sanchez tells New Times that it was not his company’s intention to harm Rubido’s cat. Flash was the first cat to ever die in the company’s care, Sanchez says, adding that the incident deeply affected the groomer, who had two decades’ worth of experience working with cats.

“He called and said to cancel all his appointments. He was traumatized,” Sanchez says. “It’s not something he did to kill the cat. No one wants an animal to die on their hands.”

Sanchez says Flash was infested with fleas, a condition that can make a cat weak and vulnerable to sickness. He says the fleas may have caused the red marks on Flash’s face. He says Miami’s Pet Grooming intend to go to trial and argue that Flash must have had prior conditions.

Rubido disagrees. She says Flash had fleas but was not infested, adding that a vet had given him a clean bill of health not long before the grooming incident.

A pet death certificate issued by Miami-Dade County does not list a cause of death for Flash. But the marks on the cat’s face might be a clue as to what happened to him, according to Carrie Hyde, a former veterinary technician who owns a pet grooming and wellness company in California. Rubido’s lawyer, animal-rights attorney Lauren Turner, will call on Hyde as an expert witness at trial.

Be advised that the two-part image embedded below depicts Flash as a healthy feline and also postmortem, with visible wounds on his face.

A photo of Flash’s face after the grooming shows three separate marks on his face where his fur is gone. One of the marks, close to his nose, is bright red, which Hyde says resembles a chemical burn.

Flash in his prime (left) and postmortem.

The presence of burns on Flash’s face would point to a shampoo as the potential culprit, Hyde says, noting that shampoo directions for cats say to begin applying at the head rather than at the torso, as one does for dogs. She says chemical burns can sometimes be caused by the use of flea shampoos or anti-flea chemicals that are not meant for use on cats.

“We see chemical burns on cats from people using products that cannot be used on cats. People think cats and dogs are the same as long as they weigh the same, but cats are far more sensitive to chemicals,” Hyde says.

In some cases, Hyde adds, grooming products meant for use on dogs can be toxic for cats, burning them and causing them to drool and convulse.

Sanchez tells New Times his company uses a flea shampoo meant for both dogs and cats, adding that no other cats have had issues after being washed with the shampoo. He also says this is the first time he or his company has been sued by a client.

He’s at a loss as to what else his company could have done for Rubido beyond offering to replace the cat and not charge for the session.

“She’s trying to sue us, but for what? What are we gonna do to fix the situation? We could give her another cat, but she just wants trouble. We did our best,” he says.

“I don’t want other people hiring groomers, only to be tricked when they say they’re experienced with cats,” she says.

Turner, Rubido’s attorney, says she hopes the case will spotlight the relative lack of regulation of pet groomers in Florida.

Although Miami-Dade County requires grooming-company operators to maintain a license for their business, neither licenses nor certifications are required of individual groomers.

“Even beauticians need to go to beauty school, but it’s not like that for animal groomers. What you end up with is untrained people who don’t have a license. And that doesn’t mean they don’t know how, but it means there’s no oversight,” Turner tells New Times. “If the state could just put in some oversight, we wouldn’t be having the really sad tragedies you see like this one.”

Similar concerns over a lack of pet-grooming regulations have arisen in other states, usually after pets have been injured during routine grooming sessions.

Sanchez emphasizes that the employee who handled Flash was not required to be licensed, adding that the man holds a certificate in professional grooming and has 20 years’ experience in the business.