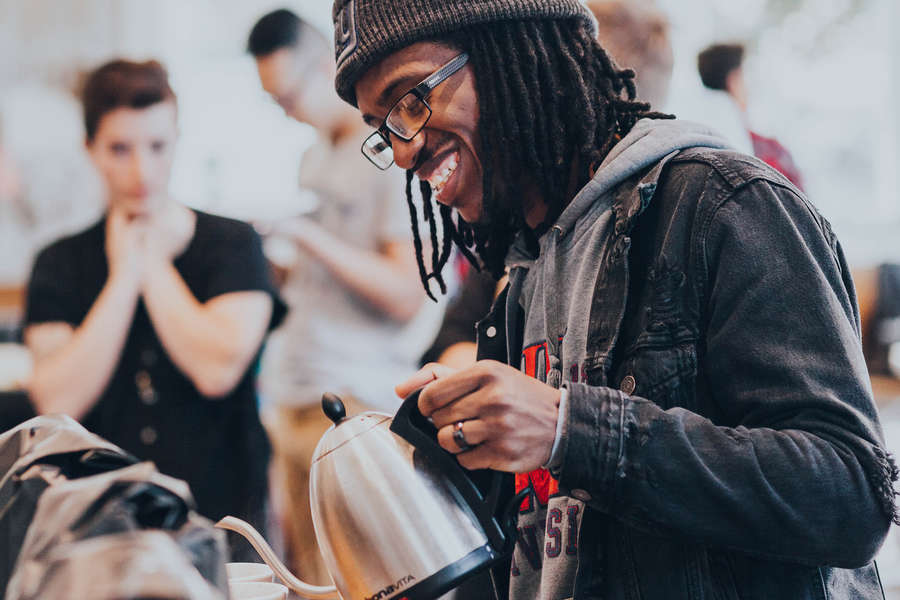 How one coffee expert has created positive change in the coffee industry in the midst of a pandemic.

When the Specialty Coffee Association (SCA) announced in July that it would be canceling its 2021 U.S. Coffee Championships season due to coronavirus-related health and safety concerns, Glitter Cat founder T. Ben Grimm saw an opportunity.

With the industry at large feeling the effects of lockdowns, job losses, and a shift away from cafe culture, he recognized that it was as important as ever to foster positive connections and progress in the industry, particularly for marginalized coffee professionals. That was, after all, the basis on which he founded Glitter Cat, a nonprofit training and mentorship bootcamp for BIPOC, LGBTQ+, and other marginalized professionals in specialty coffee, on the heels of his national Barista Championship win in 2018.

He’s regularly been asked since founding Glitter Cat if he’s going to start his own competition. Until now, his answer has been a resounding “No.” That’s largely because the SCA’s USCC “are one of the most renowned competitions worldwide,” says Grimm, who’s also an educator and consultant for Tradecraft Outfitters. “Winning that gets you a ton of recognition. It’s a path forward for career development. We wanted to help change the structures within this competition.”

With only a few months to pivot from an in-person training and mentorship model to a full-blown digital competition—dubbed the Digitition—he and his husband and partner Eric got to work. From a pool of 150 applicants they selected 36 finalists to be featured across a series of six competitions under the categories Roaster, Barista, Latte Art, Brewers, Tasters, and Coffee + Booze. The Digitition began airing on Instagram and Glitter Cat’s website Nov. 2 and will run through Nov. 23.

“We think it’s going to be one of the biggest changes in the coffee industry,” says Grimm. “It has a huge focus on accessibility and representation.”

The Digitition is not only filling a gap left by the cancellation of USCC during a turbulent time for the hospitality industry, but it’s also a case study in how to address issues within the USCC that inspired Glitter Cat’s creation. Namely, the lack of representation of BIPOC and LGBTQ+ communities on the competition stage, and the ability for new talent to break into what has largely become a pay-to-play competition cycle.

The Digitition borrowed from this model, but chose its competitors based on “intentionality versus coffee skill” says Grimm. Judging will focus on originality of performance and ideas rather than technical ability (a necessity given the virtual nature of the event). Competitors are not allowed to edit their video submissions.

“There’s a lot that the already established competitions can learn from [the Digitition] and vice versa,” says Anthony Ragler, regional developer at Black & White Coffee and Digitition barista mentor. Ragler has competed in the Barista Championship twice. In 2018, he went through Glitter Cat’s first-ever training bootcamp and made it to the 2019 nationals. The next year, following a pointed and powerful presentation on the “purgatory that people of color exist in within the coffee industry”—delivered in full cosplay as Black Panther’s Erik Killmonger—he made it through to the final round and took sixth place.

As it stands, Grimm says one of the biggest barriers USCC competitors face is cost. Registration fees to compete at nationals alone are $800. Add to that airfare, lodging, food and tools, and expenses are already upwards of $2,500 for that single competition. That’s before factoring in the cost of competitive coffee that’s upwards of $90 a pound. “If you want to have a fighting chance, you basically need to have $5,000 to throw at it,” he says.

Many competitors get around paying out of pocket through sponsorships from roasting companies, which often also come with access to coaches who offer invaluable training for the intensive competitions. However, advancement is often the first step in making those connections.

Both years Ragler competed, despite doing so under a company’s name, he paid largely out of pocket. It wasn’t until he went to nationals in 2020 that he understood the path to securing a sponsorship, which he eventually did.

“It’s not like we’re working for a Fortune 500 company,” says Ragler. “I think that there needs to be some type of cap on what you can [spend on] your routine.”

To ease financial constraints for competitors in the Digitition, Glitter Cat and its sponsors, including Pacific Foods and Torani, are covering the supplies and shipping costs—even for high-ticket items like espresso machines—so all competitors can compete from home with the same equipment and ingredients. This is something Grimm and Ragler hope will further the discussion on how to level the competition playing field beyond the Digitition.

Kae N. Bonaguro of Collective Espresso in Cincinnati, OH, says that the “biggest resource that Glitter Cat gave me was access.”

“Access to wares, like scales, distribution tools, and fancy coffee gadgets,” says Bonaguro, a 2020 Glitter Cat who earned their spot at nationals with a presentation on the importance of non-binary representation in coffee. “Access to education, through working and training with some incredibly talented baristas and coffee professionals. And, probably the most important personally—access to a community.”

Glitter Cat’s three-day bootcamps provide training from former competitors and judges on how to put together presentations, what to expect from judging, how to decipher the score sheet, and more prior to the competition season. More than that, however, Glitter Cat is Grimm’s way of extending the community offered by competition to a wider demographic that is “a better representation of who the coffee community actually is,” says Grimm. This support helps further the conversation around experiences of coffee professionals marginalized by the competition status quo.

“Trusting that what I had to say was important was something [Glitter Cat] focused on a lot,” says Eve Wieser, barista at Coffea Roasterie in downtown Sioux Falls, South Dakota, 2020 Glitter Cat and Digitition latte art mentor. “For a lot of us, that was the first time we’d felt seen and respected as coffee professionals.”

Wieser’s presentation centered around the importance of self-advocacy throughout the coffee supply chain. “As a woman and a trans woman working in coffee, I’ve been in many situations where I was not supported to either defend myself or express my needs,” she says. “That’s something that made me almost not want to pursue coffee.”

Ragler considered leaving competition behind following his experience at the 2019 nationals in Kansas City, where he was the only Black competitor who qualified. Though he’d wanted to move forward with his idea for speaking on how Black coffee professionals are “pigeonholed at two ends of the supply chain” through the lens of Erik Killmonger that year, his employer at the time balked at the idea, telling him how important “likeability” and “relatability” are in USCC competition. Ragler instead delivered a presentation on gentrification in specialty coffee without using the word “Black” once.

“My experience [in 2019] was very isolating with the exception of the people that were part of Glitter Cat,” says Ragler. “I didn’t want to be the diversity in the room.”

This year, bolstered by conversations he’d had with his grandfather on code-switching and encouragement from former Barista Champion Lem Butler, he went for it. During the presentation he called attention to the importance of the mentorship and community of Black coffee professionals he’s had access to in his career. Not only did the presentation land him a top placement, but he was also pleased to find that “so many more people from those communities not only were [at nationals], but did well,” he says. “It was a really uplifting feeling to watch that shift and know that something positive is happening.”

With 49 coffee professionals who have attended bootcamps, 36 more competing in the Digitition and a growing number of accolades, Glitter Cat is leading the charge of progress. In 2019, Em Orendorff took 6th in the Barista Championship becoming the first Glitter Cat to make finals. Since then, more than a dozen members of its cohort—many of them first-time competitors—have qualified for national competitions, including the first Black men and women to compete in the history of Brewers Cup (Kristina Jackson) and Coffee in Good Spirits (Jalen Kelly and Cyrenthia Ngueya).

However, Grimm acknowledges that Glitter Cat is “a solution, but not the solution” to the issues within specialty coffee competitions.

“I’d just like to see new people and new schools of thought come in and find all the ways to keep bettering both Glitter Cat and the industry at large,” says Ragler. “Hopefully Glitter Cat keeps pushing group culture forward in a way that forces everyone to be more inclusive and these competitions to be better at opening the doors.”

Why Do Cats Adore Climbing Into Packing containers?